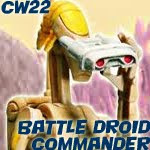 Today's Battle Droid Commander review kicks off a new feature for Echo Base News: an interactive Facebook guide to our reviews? Does this figure kick enough butt to start this out right?
TCW22: Battle Droid Commander
Accessories: binoculars, blaster, backpack
Articulation: ball joint head, shoulders, hips; swivel elbows, waist
Battle Droids have the weirdest articulation. Look at that list! Obviously they don't need to have ball joint elbows, but they have slightly balled hips. They don't need a ball joint waist, but they do need ankles and knees! This articulation is just...just bad. For an army builder and a Commander at the same time, it's almost inexcusable. Hasbro, can we see an almost entirely new mold soon? You can keep the torso and the head. Those parts have very good execution. The rest? Needs help.
The accessories are cool. The binoculars have holes built in so that the Droid can slip his little fingers in and hold it close to his head without it flying off. And it actually looks natural, so more power to ya, Hasbro. The gun is his gun and the backpack is his backpack...eh. There are some cool silver highlights to accentuate some of his features and the yellow doesn't look too bad either. The figure's paint just works so well, why can't his color scheme?
Bottom line? It's a majorly underwhelming figure. If you have a CIS army, it needs a Commander. Otherwise, don't bother.