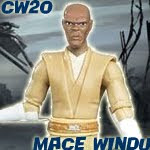 Not every figure can be perfect right off the bat. Mace Windu is one of those characters where they've had to give it a few goes, and most of the time you could blame his angry face. How does Clone Wars Mace.2 do?

Mace has a sordid history of figures in the past. If he didn't have an inaccurate lightsaber, he had a screamingly angry face or just...something. Something about him. The original Clone Wars Mace had no leg articulation and an action feature. This figure blows each and every one of those figures straight out of the water. Mace is not only super stinkin' articulated, but he comes with extra hip articulation and some new funky ankle articulation that allows the ankles to not only go back and forth, but side to side to help support his hip articulation even more. Most of the time a figure with ball joint hips is stuck on a base, but Mace can actually stand when he's going all crazy! I figure he has the hips so that he can chill on an AT-RT, but he is perfect even without.
Mace has a normal accessory of a purple lightsaber (this time a deep purple, not "could be pink"), but a cool addition of Jango's helmet from R2 Come Home. The helmet is split with a bomb inside, but you can almost fit it back together. It doesn't snap in place, but its solid and Boba can hold it like he did in the promos for the finale.
Bottom line? Hasbro cranked out some wonderful figures at the beginning of the Shadows of the Dark Side line. He is one of many. Buy, buy buy.