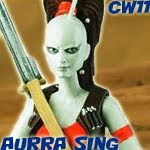 Despite all of a website's best efforts to have a rigid schedule of reviews, their reviewer will drop the ball. So here she is, just, a day late! How does Aurra Sing measure up to other females in the line?
TCW11: Aurra Sing
Accessories: blaster rifle, two hand pistols, sling (for blaster rifle)
Articulation: ball joint head, shoulders, elbows, knees, ankles, waist; swivel wrists, hips
Answer? A lot better. Aurra is a beautiful example of what Hasbro can do for a female figure to give it both a wonderful sculpt and full articulation. Aura's skinny arms are not messed with AT ALL to be granted articulation, which is a feat in itself, but even more so compared to figures like Aayla Secura or Barriss, where Hasbro fell one way or another on the sculpt vs articulation debate. In fact, none of the articulation really pops out in any way to say, "Hey! I'm articulated!" It's all wonderfully hidden and the figure just ends up looking super nice in the end.
The accessories are fun. The blasters kind of struggle to fit onto her hand unless you mess with the triggers and her trigger fingers just a little bit. The strap on her blaster can be removed so it can be worn on her back OR can hang low while she's about to snipe someone. Kudos to Hasbro for this, it's another wonderful idea that should be used much, much more often. (Fun fact: She can also hold a lightsaber VERY well, in case you're into that kind of thing.) The only minor drawback is that her head antenae is slightly obtuse and large.
Bottom line: Why are you reading this? GO! Buy her! She can still, oddly, be found in plenty of stores!