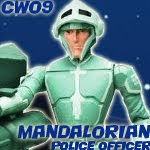 When I screw up, you guys get some goods out of it! For our second in our double header of reviews tonight, we're gonna glance at the Mandalorian Police Officer. Is he worth tracking down?

CW09: Mandalorian Police Officer
Accessories: baton, rocket launcher, shield
Articulation: ball joint head, elbows, shoulders; swivel wrists, waist and hips
Like it or not, this new Mandalore continuity is happening. Instead of a planet of basically space bikers, now we have a peaceful system who's biggest problems seems to be poisoned tea and treason. Lots of treason. I can't forget the treason.
So we went from the best in the wave to the second to worst. (Best = Aurra, Worst = General Grievous) This figure decides to forgo articulation and fun and goes ahead and just gives us a nice sculpt. He can stand pretty well and he doesn't look bad doing that at all. He can hold his weapons fairly well (his shield clips right onto his arm like the new Riot Gear Clone.) But, wow, a lack of legs really shows on a figure. There's not much he can do. What would you want him to do other than stand guard? I guess there's a good point.
Bottom line? He won't do anything for your collection. Go ahead and skip and don't feel like you're missing anything.