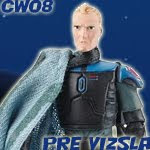 Sometimes, there are just figures you own, no matter what anybody on any website will tell you. Pre Vizsla's one of those figures. Why's he so good?
TCW08: Pre Vizsla
Accessories: two blaster pistols, dark saber, helmet, cape
Articulation: ball joint head, shoulders, elbows, wrists, waist, hips, knees, ankles

Yeah, did you read that? No swivel joints whatsoever. Is that not great? Plus, its loaded with accessories! Look at that list? Its only $7, too? What awesomeness is this? Pre Vizsla, that's what awesomeness it is! If you own any Mandalorian mold, they're all the same. (Not implying that is a bad thing by ANY means, whatsoever.) There are slight paint variations, like Pre has a trident app on his helmet and a shoulder symbol. He is also the only Mando with a removable helmet revealing his skinny but scarily accurate-to-the-show face sculpt. Pre looks like he jumped straight off screen.
Pre's accessories are pretty sweet. Not only does he come with two blaster pistols, but he also comes with a darksaber. It has a great design, and even if you don't pose Pre with it, the saber could make an amazing compliment to any custom figure. Pre comes packed in with an insane amount of personality and only in 4". Bottom line: Even though I've been saying this a lot, go. buy. this. figure.