Last week I interviewed actor Christopher Kirby, who played Senator Giddean Danu in the deleted scenes in Revenge of the Sith. Read on to see what it was like to play an early member of the Rebel Alliance and what Christopher is working on now!

Echo Base News: Were you a fan of Star Wars before you got the role of Senator Giddean Danu? How exciting was it to be in a Star Wars film?
Christopher Kirby: I was a big Star Wars fan...even before I started acting! The worlds that are created...really, its like magic, you are transported to different worlds, universes. Being in a Star Wars film really did not hit me until I was on the set. When you get hired, they are sending people out to measure you and everything, trying to get the costume right. We did not get our scenes until the day of the shoot...so you can imagine trying to get the sense of the scenes. Now here we are rehearsing...and in walks C-3PO (Anthony Daniels) in full costume with the lights on. I could not stop staring at him! Right in the middle of rehearsal...I was that little kid again watching the original film! Luckily someone flubbed a line...I got up, shook it out...and said to myself "I'm in Star Wars!...Now get it together stupid!"
EBN: What do you remember most about your time on the set of Revenge of the Sith?
CK: The size of it all...massive...a lot like when I did the Matrix sequels, but without real sets. It was all green screens. And meeting George Lucas (how many people can say that?!).
EBN: What was it like to work with recent Academy Award winner Natalie Portman?
CK: Very professional, know exactly want she wants in a scene...and a very lovely human being!
EBN: As an actor, is it disappointing when your scenes get cut from the final film?
CK: Yes, of course to hear your scenes are cut out of a film...and one as big as this one too! But they were kind enough to tell me before the film opened. But we are on the DVD/Blu-Ray. You never know, Mr. Lucas may re-cut the film and put the scenes back in...we can all wish, right?


"Right in the middle of rehearsal...I was that little kid again watching the original film!"

EBN: Now, some of the characters from these scenes such as Senator Mon Mothma are appearing in the animated TV series Star Wars: The Clone Wars. If they decide to explore this subplot in the show and Giddean Danu returns, would you return to voice the character if you were offered to do so?
CK: If they go there with the character...and if offered I would love to do it...it would be an honor! As an actor, it would be great to explore Giddean Danu on a much deeper level.
EBN: In a 2003 interview, you stated that you were sure that there would be a toy character made of you. Eight years later, do you still hope to see a Giddean Danu action figure?
CK: I was probably wishing out loud as far as the toy character was concerned. They are releasing new characters everyday...and the worlds are so vast. They will eventually get to Giddean (still wishing out loud! lol).


EBN: Would you ever consider making Star Wars convention appearances?
CK: I would love to do a Star Wars convention. If you know people, maybe we should talk. Films like these are so fan friendly...and to see how people are affected by the whole thing just reminds you why you got into acting in the first place.
EBN: What do you think makes Star Wars so great?
CK: What makes Star Wars so great...I think it taps into our own imagination and runs with it. What is out there beyond our own world, the possibilities, the adventure...the escape. Let's face it...anytime a Star Wars film comes out, it's an event. It speaks to different people from different backgrounds, different age ranges, and we all go for the ride just to see where it takes us. We are all Luke Skywalkers  travelling down that narrow passage trying to find the one in a million shot. 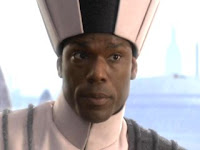 I just finished a trailer for a film we are trying to get funding for called "3010, Children of the Revenant" like Star Wars it's set in a much different world than the one we live in. The other film I finished at the beginning of this year is called Iron Sky, set in the near future, 2018. My character James Washington is sent to the moon ,as a publicity stunt to talk to the President of the United States (can you say re-election). When I get there, I find out...there is already someone there. I get captured, by Nazis (no that is not a typo) and the fun begins...the comedy is set to open on April 4, 2012. This is one to watch out for. There are two other projects...but I am not at liberty to talk about now...and you would not want me to get in trouble now, would you? Ha ha.
Interview by David Delgado.
Posted by David Delgado at 9:38 AM

Email ThisBlogThis!Share to TwitterShare to FacebookShare to Pinterest
Labels: interviews, Revenge of the Sith