Echo Base News interviews Artt Butler, just in time for the Clone Wars Season 4 premiere! Read more about a newcomer's role as an iconic Classic Trilogy character!
Echo Base News: How do you feel being a new part of the Star Wars history now? Did you grow up on Star Wars?
Artt Butler: It feels amazing! I was "welcomed" into the Star Wars family exactly a year ago today (Sept 16, 2010), ironically one year exactly from the premiere too! That's the Force for ya! That’s when I recorded the first of the three episodes of this story arc. It's only recently become "real" now that I can actually talk about it! I'm so thrilled to be a part of this piece of American history. This is literally a dream come true for my inner 7 year old. I first saw Star Wars on a field trip with my day care when I was 7 years old and it literally changed my life. When I saw C-3PO and R2-D2 walk that corridor on the Tantive IV it was all over. I remember thinking, this isn't a movie, this is REAL and they existed somewhere on this planet. Then, the tight shot of Darth Vader's helmet? DONE. Someone built those things! I needed to see that in person! I needed to touch them!! That began my fascination with "behind the scenes," the entertainment industry, and all things shiny, black, metal and plastic! Of course, I have my own custom built ANH Vader helmet. You costume builders are AWESOME!!!
EBN: How does it feel taking on such an iconic character from the Original Trilogy? How did taking the role affect your performance instead of, say, a random backgrouder or new character?
AB: Actually, I really had no idea how "iconic" Ackbar had become! I remember him vividly from RoTJ but i've been kinda out of the loop since the birth of my 3 year old daughter. When I got the audition I did some research and it turns out he's really popular! I can't be more proud to expand on who we see for a few brief minutes in Jedi and give him a life and soul through this AMAZING series!! Getting this role over a new character was really fun for me. I've always enjoyed realistic mimicry and reproduction. When I was a kid I ruined plenty of cassette decks with broken rewind and pause buttons trying to learn old school Metallica note-for-note on the guitar. I would draw or sculpt things to look as real as possible. I don't do "impressions" per se, but it's always fun to try to sound as much like whatever it is I'm trying to mimic. So when I got the audition I jumped at the chance to sound as much like a younger Ackbar as possible. I guess you'll all be the judge of how close I got!
EBN: How were you selected for such an iconic role?
AB: You'd have to ask Dave Filoni that question! I just auditioned for it through my voiceover agency like all the other things I've booked. I've been in the voiceover industry as a booth director for almost 17 years now but have only recently in the past four years got behind the mic myself and I consider myself extremely lucky to get such a wonderful role to play.
EBN: We know you don't say "It's a trap!" in the episodes, but how many times have you been asked to do so for fans, friends or family?
AB: Well, actually I have only been asked a couple of times so far but I have a feeling that is all going to change once the episodes have aired! I have a feeling it is something I will probably be saying for the rest of my life! It literally IS a trap!

EBN: Will you try and make some rounds on the convention scene after the episode airs?
AB: I would love to! I especially wanna get to Celebration. Like I said, I love realistic reproduction and you builders out there make some AMAZING stuff! To see the 501st in person would be pretty cool. I would love to meet the fans. Star Wars fans are the greatest.
EBN: Did you work closely with the other stars and Filoni?
AB: Yes! Fortunately, they record the sessions in an ensemble and pretty much everybody was there except Tom Kane and James Arnold Taylor. JAT was there for the second and third episodes but Tom does all his stuff remotely. I did get to meet him at the premiere and he gave me a very nice complement on my Ackbar. Means a lot coming from another Ackbar and such an amazing talent. He's a very sweet man. Dave Filoni is incredible. I don't think there is another person better suited for that job. He knows EVERYTHING about this show. All the crazy character names and planets and stories. He's a steel trap of information. Working with all the other amazing actors was another dream come true. Thank God Cat was there to calm my nerves. We go way back. I'll always be indebted to her for being by my side at that first recording session! She's amazing as Padmé.
EBN: What was your favorite part of performing for the episode?
AB: I think my favorite part was the last line I say in the first episode. It's a nice warm moment between Ackbar and Lee-Char and it's the final line of the episode. It really sealed the dream for me.
EBN: (Even without sending specific details, we don't want to get you into trouble or anything ;) ...) will we be hearing you later this or next season?
AB: Well, you'll just have to wait and see! See you all at the cons! "It's a TRAP!!" ...Oooh, that sounded perfect. You should've heard it. ;-) 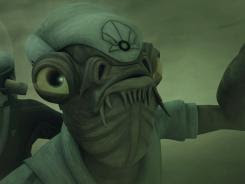