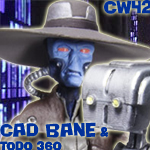 Today's reviews from Echo Base News includes a review of Cad Bane and TODO-360! The "two-pack" is a great value with a lot of fun! Read about it after the jump.


Hasbro has a bad habit of releasing bad figures in the Clone Wars line before releasing good ones. Cad was unfortunate in that he had a very bad opening figure, but then got a very, very good resculpt. This Cad features basically full articulation, minus ankles. While it's slightly unfortunate, but he still has a great range of articulation. This range is increased as his coattails are made out of soft goods instead of leather, which is great because of the added range and the soft goods aren't cheap like we're sadly getting used to. This Cad can sit in his starfighter, but you may need to remove his hat or do some major custom work to trim that sucker down.
The accessories are great. His hands can hold his pistols...alright. It may not be an exact science but they definitely won't fall out just because you looked at them wrong. The removable hat sits well on his head and looks like a hat should. The removable satchel sits nicely on him and doesn't look too bad. With a little futzing, his jacket can come off, too. There's really no reason that you'd want to except for customizing, I guess.
TODO is almost a separate figure. He was first made to come with the original Cad figure (explaining the lower articulation), but instead coming with this new Cad made the excellent value even better! TODO only has one point of articulation in the head, but when you move it to an awkward angle he won't be able to stand. He doesn't have a peghole for a stand, so you're stuck with him standing with his head looking straight forward. For a free figure, he is a great deal and only adds a little fun to your display. Bottom line: buy the figure. He's fun, great value and looks just awesome. He can still be found at most Targets.