I have just interviewed Robert Hendrickson, who is a well known Star Wars artist. Read on and check it out!
Echo Base News: What first inspired you to be an artist?
Robert Hendrickson: I started drawing pretty young, mostly just for fun. Then in high school I discovered the movie poster art of John Alvin and Drew Struzan and that really had an effect on me as an artist. It was exactly the type of work I wanted to do. They were creating this incredible art that captured the essence of the films in one image. I was immediately hooked and started to focus my work in that direction. I decided to go to art school to really polish my work and during the time at school I had the opportunity to meet and become friends with one of my idols, John Alvin. John and his work was a real inspiration that still inspires me today.
EBN: What sort of artwork do you do for Lucasfilm?
RH: I have created artwork for Star Wars Insider, Topps sketch cards and limited edition prints. I first became an official Lucasfilm artist in 2005 when I was commissioned to create the artwork for Omega Squad: Targets for Star Wars Insider magazine. It was the first Republic Commando short story by Karen Traviss and was a great introduction for me into the world of Star Wars art.
EBN: What's your favorite piece you've done?
RH: That's a tough one. I've done quite a few pieces and all of them hold special meanings in different ways. If I had to single one out right now, I'd probably go with my Star Wars Celebration Japan art. Mostly because of everything surrounding the art. It's definitely an "event" piece for me. It was a great experience being able to go to Japan to represent Star Wars among a very small group of artists. Being able to interact with international fans as well as my contemporary international artists for the first time was really special. Every time I look at that piece it brings back a ton of memories.

EBN: Besides Star Wars, what other work do you do?
RH: The last few years in particular my full focus has been on entertainment art. My work ranges from film and television properties such as Indiana Jones, Star Trek, Farscape, Game of Thrones and more. I'm hoping to begin branching out into some new areas as well very soon, so be on the lookout for some new and exciting things from me.
EBN: Do you take commissions and how would someone contact you for those?
RH: Yes, I do take commissions. If anyone is interested, please visit my website at www.roberthendrickson.net There you can see samples of my work as well as my contact info and details for commissions or you can contact me directly at robert@roberthendrickson.net. I'd be more than happy to discuss what you are looking for to add to your collection.
EBN: What process is involved before a image can be used for prints and be sold on the market?
RH: Start to finish it's actually a long process. Usually I'll start the process by doing numerous thumbnail sketches to get the design and flow that I like. Next up will be a tighter sketch that will be worked into a black and white or color comprehensive to show to the client for approval. Once I have approval it's time to start the final art. I work traditionally so my process is to get the drawing laid out, create an underpainting, and finally work all my colors and details in with a paintbrush, airbrush and colored pencils. The client needs to make final approval on the art and then I can have it scanned to prep for the printing. Once scanned, I do a little color correction and clean up any blemishes. If there is to be text on the print I'll add it to the layout and then it's off to the printers. Finally, you have the finished product. 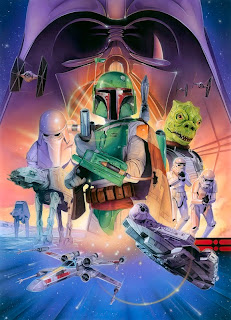 EBN: Out of the six Star Wars films , which is your favorite?
RH: Easily, The Empire Strikes Back. Empire just did everything right, the heroes, the villains, the ending and Boba Fett! There really is just too many things to like about Empire.
EBN: When did you discover Star Wars?
RH: Very young. I wasn't born when Star Wars originally released but I was definitely around for Empire and Return. Star Wars was very big in my childhood; everything from the movies, toys and even the bed sheets. They really captured my imagination and were unlike any other movies at the time. I loved everything about them. The films were and still are a definite influence on me and one of the reasons I've pursued cinema art.

EBN: What conventions are you planing on being at?

RH: Coming up this October, I'll be attending Fan Days in Dallas, TX. Always a great convention and I'm really looking forward to it. If you're in the Dallas area be sure to come out. I'll be trying to attend a couple cons early next year but nothing to confirm at the moment. Then there is Star Wars Celebration VI next Summer which I hope to be invited to once again and have the opportunity to create brand new art for. Be sure to check my site at www.roberthendrickson.net for up to date news on convention appearances that I'll be making. Also, if you'd like to suggest a convention in your area to me, please do. Maybe I'll have a chance to make it out to you in the future.