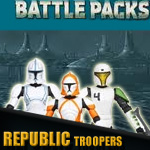 Will the sole Battle Pack for the Clone Wars line in 2012 be good enough to keep collectors happy, or leave them wanting more? Read on to hear my thoughts on this Battle Pack.

The Clone Wars: Republic Clone Troopers
Accessories: 1 DC-15 blaster rifle, 2 DC-15 blasters & 1 removable helmet (Cutup).
Articulation: Ball-jointed head, 6 ball-jointed shoulders, 6 swivel wrists, swivel waist (Cutup), 2 swivel torso's (Hardcase & Bomb Squad), 6 swivel hips & 6 ball-jointed knees.
In our one Clone Wars-related battle pack for the whole of 2012, it includes three re-paints of previously-released figures. Cutup in cadet gear is a re-paint of the 2011 basic Hevy figure. It is interesting to note Hasbro said Hevy would be the only Clone in cadet gear made. However, Hasbro went back on their word yet again, and now we have a buddy for Cutup. Both Hardcase and the Bomb Squad Clone are re-paints of the Clone Trooper Draa scukpt, which is a variation of the Stone sculpt. Only articulation lacking in truth is lack of ankles on all three figures, unless you really must have ball-jointed hips.
The accessories included with these figures are nothing unique or special. Hardcase and the Bomb Squad Clone both come with a DC-15 blaster, the most used Clone accessory in the line. Cutup comes with better, but still re-packed accessories. One a DC-15 blaster rifle, the other the removable helmet included with the Hevy figure. As a battle pack, the accessories work well with this battle pack, and nothing too crazy that Hasbro invented.
This is a pretty nice battle pack. It is also only one out of two 3-figure battle packs that have three new figures, albeit re-paints. Cutup has the same articulation as Hevy, but is narrowly better in my opinion. The face-sculpt is slightly different, and looks slightly more Clone-like. He has a different paint-job on the arms, which Hasbro have designed well. Hardcase and the Bomb Squad Clone are decent as well. The Bomb Squad Clone has an amazing paint-job, and I disagree with any fans who think the orange looks too bright. If we saw them in a lighter scenery, they would look exactly like that. Hasbro unfortunately made a fatal error with the Hardcase figure. The helmet deco is off, and doesn't resemble the deco seen in the show. If any figure needs an upgrade here, Hardcase does, in order to fix the helmet deco. While the figures are cool, it feels kind of random. Like Hasbro just picked three random Clones to make and threw them in the same pack together. In terms of phase I Clones, I would have much rathered see Corporal Comet and/or a Wolfpack Clone in grey released finally, who needed figures much more than the three in this pack (Except Hardcase, maybe).