The Wampa Pen - What makes a true fan? 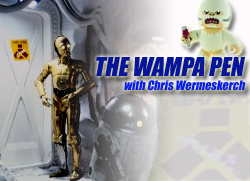 Remember that deleted scene in which C-3PO tears the sticker off the Wampa Pen and the Snowtroopers accidentally open the door? That's pretty comparable to what's happening here. Read on for some of my opinions; tonight I focus on "What makes a true fan?"

So, for a new feature, David and I decided that it would be cool to let me write some articles, articulating my thoughts on Star Wars: whether it be the Hasbro collection, fandom, where the franchise is at, etc etc. So, tonight, I will focus on a question: "What makes a true fan?"


What makes a “real” Star Wars fan? I hesitate to post this because of a recent comment made on the Ben Quadinaros review, saying that (warning: bad paraphrase ahead) “real Star Wars fans know the backstory behind Ben getting a figure.” Where is the line drawn between a real Star Wars fan and somebody who is not?


Is a child born in the 90’s less of a Star Wars fan than those who experienced A New Hope in theaters while it was still known as Star Wars? Are Sideshow or Gentle Giant collectors more of fans than those who collect Hasbro? Are collectors in general more fans than someone who doesn’t own a single piece of Star Wars memorabilia? Does owning the Blu-Rays make you more of a Star Wars fan than the person who only owns the VHS copies?


I’m here to argue that there should be no such thing as a “real fan”. Let’s be honest, saying that somebody is a “real” fan is a platform in which to bring one’s self up. Why do we call each other out as less than ourselves for any reason, anyway? (Let me restate this is not an attack, but the real fan talk has seen a rather large surge this year over what it had in the past.) Why can’t we all exist as “real fans” without needing to fill certain criterion?


Some people accept Expanded Universe without question. They think that every single part is SW gold and they will buy anything. When I look at Expanded Universe, I know that it’s all canon to a degree. Does that mean that I like all of it? I don’t like the Flying Rancors, I don’t like the three million troops in the Clone Wars, I don’t like every part of the Yuuzhan Vong War, I don’t like every part of the Clone Wars, even. But does that make me less of a fan? Will you call somebody who has only seen the movies a “fake” fan in the sense that they are not a “real” fan because they don’t know all of the backstory?


Some people like the Clone Wars, some people do not. Without arguing at the level of its continuity, does that mean that people who do not like it are less of fans than those who don’t? How do we know what you have to like and not like to be a real fan?


Star Wars should be a community, not opposing armies. If you like the Legacy Era, why should that preclude you from being friends with somebody whose only focus is on the Rise of the Empire era? The common love for Star Wars should bring us together, not bring separation between us. Just because someone doesn’t like, know or own something should not be a criteria for being a real fan.

Email ThisBlogThis!Share to TwitterShare to FacebookShare to Pinterest
Labels: The Wampa Pen