Actor Alan Ruscoe played three memorable characters in The Phantom Menace; Jedi Master Plo Koon, Neimoidian captain Daultay Dofine, and the Twi'lek Bib Fortuna. As we approach next year's exciting re-release of The Phantom Menace in 3D, I chatted with Alan about his involvement in the first Prequel movie. This interview was originally conducted back in June.

Echo Base News: How did your acting career begin?
Alan Ruscoe: Like a lot of actors, it started in school, in my case high school. I didn't really fit in anywhere, I was terrible at sports (I still am...a friend of mine at drama school once likened watching me trying to play football to watching a dying wasp trying to find it's way through a closed window: lots of effort without really doing anything useful), I was kind of academic but lacked any motivation then, I auditioned for the school nativity, ending up playing the drunken owner of the donkey that Mary and Joseph borrow to get to Bethlehem. When I was 14, I became ill with meningitis and had to take eight months away from school. By the time I'd gotten back, my academic career in high school was finished and I had to go to college. I spent four years in higher education, originally getting the qualifications I'd missed out on then took a BTEC National Diploma in Performing Arts. I was originally going to teach drama, then eventually, I admitted to myself that I wanted to act and applied for drama school. I got a place and graduated in 1995. I was a jobbing actor from then on.

EBN: How did you get your roles in The Phantom Menace?
AR: I landed a part playing one of the Mangalores in Luc Besson's The Fifth Element. They wanted three actors six feet tall or over to do all of the foreground stuff wearing animatronic heads with extras in the background wearing rubber heads to be this rather terrifying mercenary army. It was working on that that I met the amazing Nick Dudman and his wonderful creatures team. After The Fifth Element wrapped, Nick began work on The Phantom Menace and he very kindly recommended me to Lucasfilm when they started looking for actors to play the masked roles. I was originally cast as Plo Koon, then Daultay Dofine. [Bib Fortuna] part came later.
EBN: Did you have any exposure to Star Wars before The Phantom Menace? Do you consider yourself a fan?
AR: I grew up with Star Wars. It was a part of my childhood and I've truly lost count of the amount of times I've seen the original trilogy, before and since filming the Prequels. Like many people of my age, Star Wars isn't just a film franchise, it's an iconic part of my generation. Horror films are my true love; I've been watching them as far back as I remember and still do, but Star Wars is a part of me, always will be. If that makes me a fan, then...yes.

EBN: Twelve years later, Plo Koon is quite a popular character. How does it feel to know that you originally brought life to a background character that eventually became a fan favorite?
AR: This is where I'm going to disagree and nit pick here (sorry guys!). The guys that bought life to Plo Koon were the phenomenally talented people working in the Creatures Department. They were the guys that designed and built the concept of Plo Koon. They were the people that worked hour after after, month upon month before filming even started, sculpting, painting and fitting it to my odd shaped face not to mention the time on set and in the workshop before and after shooting every day of filming. I was a part of that process and it was a wonderful privilege to work with them to create Plo Koon as you see him, but, the real credit goes to these guys. To be a part of all that...a mind blowing honor.
EBN: Which alien took the most time to prepare (costume, make-up, etc.) before filming, Plo Koon, Daultay Dofine, or Bib Fortuna? Can you tell us a bit about the process involved in those transformations?
AR: Bib was definitely the longest prep for me (four hours to get into the prosthetic make up). With the other two characters, it was more of a case of putting the mask on and getting on with it. Dofine's head was animatronic, so that could be removed and put on at the side of the set before doing a take. Plo Koon was trickier...that mask was applied at the start of the day and then had to stay on until the final shot...like wearing a training shoe on your head for the whole day.

EBN: What else do you remember about your experience on the set of The Phantom Menace?
AR: I remember that there was this unspoken acknowledgement that we were making one of the most eagerly awaited films for quite a while. Every so often, I get what I call "pinch me" moments, and Star Wars was no exception. I'm on set, doing my job and then it occurs to me that I'm watching Frank Oz perform as Yoda or that Samuel L. Jackson is having a chat with me about comic books...it's all so surreal and you do question for just a second if it's all real...then you get back on with the job you've been trained to do. 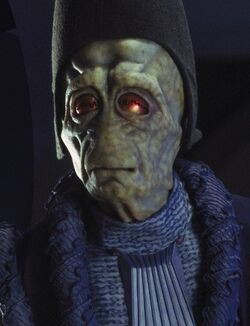 EBN: With a memorable speaking role and quite a bit of screen time throughout the movie, wouldn’t you say Daultay Dofine deserves an action figure by now?
AR: Absolutely. I've got a real soft spot for Dofine. You've got to be a monumental coward to make the rest of the Nemoidians look brave and Dofine manages that. He's so utterly rubbish that I find him endearing. He is also technically one of Darth Vader's first ever victims...technically. [UPDATE: A Daultay Dofine action figure was announced by Hasbro at San Diego Comic Con 2011 for release in The Vintage Collection in 2012.]

EBN: Are you looking forward to The Phantom Menace’s return to the big screen next year?

AR: Yes, very much so. It'll be nice to see it in context with the other two prequels on the big screen. From my own geeky point of view, it'll be really cool to see it in 3D.

EBN: Do you think The Phantom Menace deserves more appreciation from the fans than it generally receives? Why or why not? (This reporter personally believes it’s easily the strongest of the three Prequels.)

AR: I personally think that it's better film than some would give it credit for, there seemed to be a tendency to allow some of the weaker points of the film to overshadow some of the stronger points. I love Liam's performance, I think he shows the very fine balance of what it is being a Jedi Knight whilst dealing with the flaws in his nature. The end battle between Qui-Gon, Obi-Wan and Darth Maul was worth the price of admission alone. I don't think that sequence was topped in either of the other two prequels, either cinematically or technically. Ray Park is a force of nature in that battle. 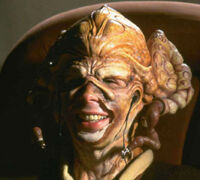 EBN: What do you think makes Star Wars so great?
AR: If I could answer that in one sentence, then I'd be far richer than I am!
We'd like to once again thank Alan for giving us a wonderful interview, and we look forward to seeing Plo Koon, Daultay Dofine, and Bib Fortuna back on the big screen for the 3D release of The Phantom Menace starting February 10, 2012!
Interview by David Delgado.
Posted by David Delgado at 9:43 PM

Email ThisBlogThis!Share to TwitterShare to FacebookShare to Pinterest
Labels: interviews, The Phantom Menace