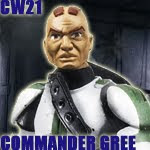 Not a very Halloweeny figure, but read it anyway!

Before we saw Phase I Gree and Cody, we could only wonder what they looked like. The Clone Wars answered that and for Cody decided, not too different, but for Gree? Pretty darn different. Of all of the transitions we’ve seen between armor, Gree has the biggest change. (Not to mention what we assumed that his hair looked like compared to what it actually does!)

Commander Gree is…well, I can’t say anything nice, I guess. He’s another Clone Commander. He was based on the original clone trooper, meaning he has full articulation: ball-hinged wrists and ball joint ankles and a ball-joint waist. He’s a little stockier in the chestal area and some have thought that he had a new chest mold. I wasn’t sure and I don’t have a regular Clone on hand to compare against. (Weird, I know, but try not to judge me.)

The green matches the regular 41st that was released in the Jar Jar wave or the first wave of the red carded repacks. He has this sweet bandolier that makes him feel like an even bigger bad-arse. He has a sweet little side holster where you can stick his pistol into. This may be Gree only or my sample, but my figure’s trigger finger can slip into the pistol almost perfectly. (A HUGE plus in my book.) Did I mention his double Mohawks? No? Well, now I did. They’re…well, they’re pretty interesting. Not bad interesting. It adds a lot of character to Gree, someone who’s seemed pretty flat before. Is he worth buying? Yes. Is he boring? Yeah. He’s another Clone…