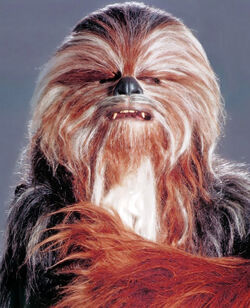 We're big fans of John Coppinger and his many contributions to the Star Wars saga! Back in 1983 he was part of the team that created the incredibly advanced Jabba the Hutt puppet for Return of the Jedi (which we interviewed earlier this year; click here to check out Part 1 & Part 2 of the mega-interview if you haven't already). Then when it came time for Star Wars' return to the big screen in 1999, John was involved with bringing more characters to life for The Phantom Menace including Yarua the Wookiee senator and Podrace spectator Graxol Kelvyyn. I recently interviewed him again about his work on The Phantom Menace as we look forward to its return to theaters next February.
Echo Base News: How did you become involved with The Phantom Menace, and how did you end up playing the roles of Senator Yarua and Graxol Kelvyyn?
John Coppinger:  I was working on 'Lost in Space' (sculpting cryo-suits for Vin Burnham's costume department) when Nick Dudman offered me a job on the new Star Wars film. I really liked the concept drawing by Doug Chiang so was pleased he gave me the job of sculpting the Anxx characters. I also helped develop the costume under-structure, in Monique Brown's department, if Jerome Blake wasn't available. I was in the rig, on 24" stilts, when we demo'd it to George Lucas. The character stood nearly 11ft tall, with me looking out of the chest, so it was never seen standing in the film. George L. pointed out that if an Anxx was beside Yoda the pair would have to stand way back from the camera.
On the day of the Podrace scene being filmed someone realised that Jerome B. was in another costume, so I had to run up to the set and jump into the rig to operate the arms and body (The head and face were operated by cable and radio). So that was fun and very hot for about five hours! Also at the start I had to ask if I was 'good guy' or 'bad guy' as I'd not had time to check the script!
Re. Senator Yarua - The Wookiees are my favourite Star Wars characters so I was very glad when we heard that Peter Mayhew couldn't come over to the UK for the Senate voting scene. I was the tallest guy in Nick Dudman's department so he asked me to be a Wookiee for a day - not something I was going to turn down. :)
I practised Wookiee howling when riding my motorbike into work, probably frightening a few drivers, and knew that being convincing to the younger folks in the department was more scary than going in front of the camera! All went well, and being in an archive Wookiee costume was one of the best days of my film career.
There were actually three Wookiees in that scene, so I started with white fur on the costume, acting old, moved right with some white fur removed, acting middle-aged, then finallly the young guy, with no white, and acting young and enthusiastic. All the shots were put together for the final scene. I had to take being a Wookiee seriously; it's such an iconic character, and grown people turned into children in front of me!
I also wore the costume for the stills shoot. We only found out later, when books were published and an action figure was made, that the character was called Senator Yarua.
EBN: So did you actually perform the Wookiee howling?
JC: I did, but only for the crew - and one of the Assistant Directors nearly fell over the side of the set!
EBN: What do you think of the action figures that have been released of your characters?
JC: It's very strange to see yourself as an action character! Although I like the small figure of Senator Yarua, I was most pleased when the stills shoot pictures showed up on the packaging and in various books.
Re. the Anxx characters, I guess I wasn't paying attention! I had signed pictures of Horox Ryyder (played by Jerome Blake) until a fan showed me the 'Watto's Box' model set and I realised I'd actually performed the Graxol Kelvyyin character. But I did sculpt the head and hands that were used for both Anxx characters so Jerome didn't mind. There's a bit of a mystery over who did the stills shoot for the Anxx - I certainly don't remember doing it, and neither does Jerome, so who knows?
Star Wars seems to be a self-generating universe - when we worked on thsse films we often had our own 'workshop' names for various characters. It was only when the action figures and books came out that we found out the 'real' names and more details about their culture, etc.

EBN: What do you remember about your time on the set of The Phantom Menace?
JC:  I was mostly sculpting various cantina creatures (Hammerhead, Bith musician, Gredo), the Gorgmongor, a couple of the Jedi Council (hairy guy and the lady with tentacles from her head - sorry, I've forgotten their names!) and of course, the Anxx characters.
So I was only on set for the Podrace scene (playing Graxol Kelvyyn) and the Senate voting scene (playing several Wookiees). Actually there was a fourth Wookiee, who was asleep, so I had to act waking up suddenly - not sure if that made it into the film!
There was something quite nostalgic about the sets - they were smaller than on Return of the Jedi, because of CGI filling in spaces, but if there's such a thing as the smell of Star Wars those sets had it.
It was also great to re-sculpt known creatures, iconic characters from the first three films, because it was possible to add a bit more detail and enhance them.
I did hope to come back after fifteen years and sculpt Jabba as a lad, as I've probably said before, but I'm afraid CGI put paid to that ambition. Even so, it was great to 'be back'.

I did perform the Wookiee one more time - for an internal Lucasfilm piece about a new video format. So I was lip-syncing the Wookiee as Rick McCallum read the script. I've no idea if that was ever seen, or maybe it was just circulated inside ILM.

EBN: What do you think is the greatest thing you've contributed to Star Wars over the years? Is there a particular creation you look back at and feel especially pleased with?

JC: Well, I know it's obvious but I guess it has to be Jabba. The whole process of making him 'live' was a new frontier in animatronics and that was something I missed later. I didn't miss the 100+ hour weeks of course!

But The Phantom Menace was great in another way; going back to old creatures (mostly from the Cantina) and trying to improve them without changing their essential character.

In a way doing conventions is a contribution that I enjoy; telling the fans 'war stories' that they want to hear and sharing some of the strange magic of being on a Star Wars set. I was doubtful at first about going over the past, but I guess it's a kind of privilege to have been there and be able to pass some of it on.

To go back to your question: The two things that really make the world of Star Wars special for me is the life that Jabba has taken on, beyond his first appearance on film, and my day as a Wookiee. 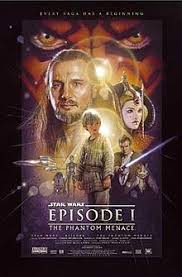 EBN: What is your opinion of The Phantom Menace?

JC: To be honest I would have to see it again, it's some time since we saw the crew showing, but I remember enjoying the film at the time. And it was certainly a good atmosphere at Leavesden Studios when I was working on it. I know it's been criticised for being too much CGI and not enough storyline but all the Star Wars films are full of new imagery and paint a story more like a Japanese picture book than a western novel. The opening sequence of the first film still hasn't been beaten for first impact.

My primary criticism of George Lucas' use of CGI is that he tried to do too much too soon. He was in love with the technology and should have been more critical of the end result.

The battle scenes with the droids were too much like a computer game in resolution - compared to what was achieved for Lord of the Rings. And I think Darth Maul was a good/bad character who was killed off too soon.

EBN: As someone who worked on puppets for Star Wars, what do you think of the recently announced switch from the Yoda puppet to a CGI Yoda in The Phantom Menace?

JC: I remember someone being asked that at a convention - almost certain it was Mike Quinn. He'd worked on both the puppet and the CGI version of Yoda. I think he preferred the puppet, for the usual 'being there' reasons, but acknowledged that for fight scenes a puppet just wouldn't be able to achieve that level of action.

So I'll stay with the view that CGI is a good tool for wide action shots and puppets are best for interaction with other performers.

EBN: Is there anything else you'd like to cover?

JC: I'd like to add a tribute to David Tomblin (The 1st Assistant Director on Return of the Jedi). He came round the workshop just once when we were building Jabba. Then, during the Rancor pit scene, we found that Jabba couldn't look down into the pit. David asked me what would happen if someone pushed Jabba from his back - I said he would probably jump off his spring mountings (something we'd tested) and maybe burst the air bag in his belly. David remembered and understood what I meant (from all the countless details he had to carry in his head) and took the risk. I know if the air bag had burst he wouldn't have blamed us.

David also gave the Jabba crew the best compliment ever - By striding through us on set, bull horn in hand, and gesturing back with the comment - "You did a good job on that thing."
We would like to once again thank John Coppinger for taking the time to tell us about his experiences working on two Star Wars movies. We always enjoy hearing from him!
Interview by David Delgado.
Posted by David Delgado at 4:33 PM

Email ThisBlogThis!Share to TwitterShare to FacebookShare to Pinterest
Labels: interviews, Return of the Jedi, The Phantom Menace