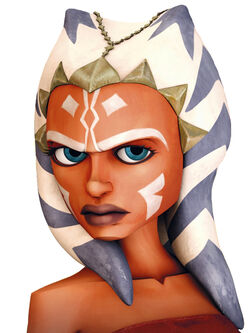 At Fan Days I got a chance to talk to the always wonderful Ashley Eckstein about voicing Ahsoka Tano in The Clone Wars, Season 4, and the Her Universe line of fangirl clothing and accessories. Read on!

Echo Base News: Ashley, what is your favorite episode that's aired so far?
Ashley Eckstein: My favorite episode that’s aired so far…I have to say episodes because I have to pick the Mortis trilogy. Those are my favorite. I think they’re so well written. They’re written by Christian Taylor, and also the entire writing staff of The Clone Wars who are just fantastic. I think the animation is stunning. And Sam Witwer who is the voice of the Son and also Matt Lanter who’s the voice of Anakin, I thought their performances in those episodes were fantastic, so those would definitely be my favorite.
EBN: How were you first introduced to Star Wars?
AE: I don’t remember my exact age, but I was young, I mean three, four, or five, and I just watched the movies. Obviously I didn’t have the experience to watch the Original Trilogy in the theaters. I just missed the cutoff there to actually enjoy it when I was younger, I was too young, so I watched the movies, and then obviously I got to see the Prequel Trilogy in the theaters and I just fell in love with Star Wars when I was a little girl.

EBN: What's it like working with the other members of The Clone Wars cast?
AE: You know, we really hit the jackpot with our cast because not only are they immensely talented people, I mean we have some of the best of the best in the voice over world. And I’m truly the Padawan there because I’m new to voice over, but we really have some legendary voice over actors as a part of our cast, but more importantly just great people. I mean, some of the nicest people you ever want to meet between James Arnold Taylor, Tom Kane, Dee Bradley Baker, Catherine Taber, Corey Burton they’re all just some of the nicest people. And they give you a master class in voice over every single time you walk in the door. And then of course at the helm of it all is Dave Filoni, our supervising director. Dave is just instrumental in our process as actors, he’s just one of the best directors I’ve ever worked with.
EBN: What are your thoughts on how the Mon Calamari arc turned out?
AE: The Mon Calamari arc was just truly unbelievable, because what most people don’t realize is that actually doing an animated show underwater like that is not an easy task. And when we first started and when we first aired that wasn’t even possible, to do an arc completely or almost entirely underwater, you know, it’s just a completely different style of animation and it just shows how far the show has come. It really is the most advanced animated show on television and I think those three episodes in particular just prove that.

EBN: Will Season 4 be the best one yet? What will set it apart from previous seasons?
AE: Oh wow, you know, I think it will be the best season yet because it just continues to get better as it goes along. You know, what a lot of people didn’t realize is that the animation studio, Lucasfilm Animation, did not exist before The Clone Wars. It was brand new, so they were starting an animation studio from scratch. And as with anything, you make beginner’s mistakes, you learn as you go along, and so every, every year they just continue to raise the bar. I mean, the talent that we have working on this show is unbelievable in terms of the animation and the writing and everything across the board. They just continue to raise the bar every season and I think it’ll continue to get better. I think what sets this season apart is the epic battles, I mean, you saw that in Mon Calamari. It’s called Season 4: Battle Lines and it’s just epic.

EBN: There are some episodes coming up with Lux Bonteri in them. Can you comment on Lux and Ahsoka's relationship at all? It's gonna be interesting!
AE: Yeah, I can’t really comment on their relationship, except, you know, the two of them really bonded in a way that’s different. I mean, I think Ahsoka doesn’t quite know what to think of him because, you know, he’s supposed to be a Separatist, and Separatists don’t look like that so she’s very confused! But the only thing I will say is that Ahsoka has different emotions in an episode with Lux that are almost more her own age. Ahsoka has to act so mature all the time and I think in that episode you’re really gonna see some emotions that show her age.
EBN: What is your favorite Ahsoka collectible released so far?
AE: My favorite Ahsoka collectible released so far, and I don’t know if you could still buy it, you’d probably have to buy it on eBay, is her lightsaber that they came out with. I think Rubie’s Costumes did it. You can’t find it anymore, it was just from the first season, but it’s actually Ahsoka’s lightsaber. I also really like Ahsoka’s backpack that has Stinky in it. I have that, and that’s just one of my favorite things.

EBN: What's next for Her Universe?
AE: For Her Universe, we have a couple new products coming out for the holidays, a new shirt designed by artist Cat Staggs which I’m really excited about. We have a new charm for her Star Wars charm bracelet, which I’m really excited about, that’s been a nice collectible this year. And we have a new pin that’s free with purchase with Yoda. Last year we did R2-D2 and this year we’re doing Yoda. It’s so cute. He has a Santa hat on with a 'candy cane' cane. And then a couple new products for SyFy as well for Battlestar Galactica and Warehouse 13.

EBN: What's the coolest collaborative experience you've had working on Her Universe?
AE: Wow, the coolest collaborative experience with Her Universe…oh geez, I don’t know if I could pick just one because it’s all special. I mean, the fact that so many people share their time and energy and passion and efforts with us is just so overwhelming. And so whether it’s between Dave Filoni who did a shirt for us, Katie Cook, Cat Staggs, an internal designer we have called Jay Aguilera, it’s just really special that people are believing in a new company and I just can’t thank them enough for believing in Her Universe when nobody even knew what it was.
EBN: And finally, since we're in this convention environment, can you tell us about a funny or crazy convention experience you've had?
AE: One that comes to mind right now is I was hosting Star Wars Weekends, this show called Behind the Force, and Dave Filoni was the guest and we had an inside joke about bears, and so I decided to play a joke on him on stage and say that his wolf shirt looked like a bear shirt. I said, "hey where’s your bear shirt?" and of course that just set him off because Dave loves wolves and the fact that I would call his wolf shirt a bear shirt just, you know, he wasn’t having that. And this show just took on a life of its own. We started telling bear jokes, one after another, and the audience got in on it with us and at the end of this forty minute show everyone was laughing so hard they were crying. So it was kind of one of those things you had to be there but it’s just nice because it involved the entire audience by that point and it was a really fun experience. 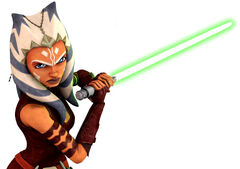 We'd like to give a huge thanks to Ashley Eckstein for taking the time to give us such a cool interview during the convention! To see the latest exciting products from Her Universe, click here to check out their site. And click here to check out Ashley Eckstein's Facebook page for all of the latest updates from The Clone Wars and Her Universe.
Interview by David Delgado.
Posted by David Delgado at 10:08 AM

Email ThisBlogThis!Share to TwitterShare to FacebookShare to Pinterest
Labels: Her Universe, interviews, The Clone Wars Season 4