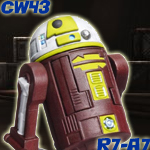 Today's reviews at Echo Base News includes Ahsoka Tano's astromech droid, R7-A7! Is this teeny little dude worth the asking price? Read on!

The Stone mold and astromech molds are to me as honey is to Winnie the Pooh. I loves them. Astromechs have so many hidden little features: a little grabbing arm, a computer-plug in arm (like R2 uses so often in the OT), a periscope and a rope that comes out of his back (like the one that R2 uses to drag 3PO’s head through the dirt on Geonosis) that can be pulled back in by twisting his dome. The best part about all of these? They’re easily hidden! Sometimes when Hasbro tries to sneak in some features we get big, obtrusive buttons or some articulation suffers. Thankfully, that’s not the case here otherwise these would be a pretty bad deal at $8.

If you look on about any forum, you’ll notice that most fans argue about the dome. Most would agree that it looks too dark, some think its fine. You’ll find me on the bit too dark side. To me, it looks like it’s supposed to be lighter with a darker brushed look. Either way, it looks alright and it doesn’t take too much away from the figure to me. I like it enough, especially since for most collectors it’ll spend most of its time living inside of Ahsoka’s Starfighter. Bottom line is own at least one Astro mold, maybe more than one. Ahsoka fans will want this droid, too, considering that it’s hers.

Posted by Chris Wermeskerch at 2:13 PM