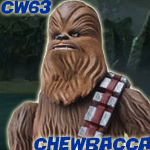 Today, Echo Base reviews Chewbacca! (This review is dedicated to Jenn ;)) Is the animated Wookiee worth your time and cash? Read on!


With some of the new figures from the Savage waves or the Plo Cold wave, Hasbro has reformatted the packaging to show less of the Galactic Battle Game and more of their big honking weapons on the side in conjunction with the Clone Wars Adventure game. Chewbacca, instead of a big honking backpack or made up accessory, comes with a big honking bowcaster. It fires, of course, but the thing is way too big to look serious. There’s a removable clip at the top which just can’t stay on for the life of it. The normal bowcaster seems reworked from the realistic one, and Chewie can hold it just fine despite its somewhat awkward design. Whew. The Trandoshan rifle/shotgun is somewhat small on Chewie (maybe somewhat small altogether, sadly.) It looks great with added orange details about it and it in no way affects the value of this package. The bandolier is slightly awkward, it moves around a lot and just won’t stay still! If you slide it under Chewie’s head it turns out okay, though and the head doesn’t float like some freaky ghost. Chewie and his many, many accessories perfectly fill out even this bigger bubble. (A bubble big enough for Seripas, might I add.)
Chewie comes with the somewhat standard articulation we’ve come to expect from Vintage or Early Bird Chewbaccas, minus ankle articulation. His super long feet might have been able to support wilder poses had he had the articulation. But I digress, the figure is still great without. The waist joints aren’t exactly well hidden but they don’t come forward and ruin the design of the figure. A little fur was sculpted over the joints so that they’re a little more hidden, but it prevents Chewie from sitting too well, so he may have to be awkwardly slid in to the Falcon to pilot it, if you so choose.
The only big downside I can find for this figure is that he has splotches where he’s just too dark. Not dark brown, but flat out black. His face is especially dark and had that been fixed, more of his personality would have come out of it. Bottom line: Do I even need to say? You’ll end up buying this figure anyway. 5/5