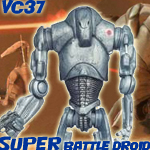 Today we begin reviewing some older figures from Hasbro's Vintage Collection, starting with the Super Battle Droid from 2011's Attack of the Clones-themed wave of figures. Is this figure more than a repaint? Read on to find out!

The Vintage Collection Super Battle Droid is just a simple repaint of the Super Battle Droid from the 2008 Battle on Mygeeto Battle Pack, with a pistol accessory thrown in for good measure. The Super Battle Droid features the same articulation as the 2008 figure, which is good enough for the character. One can replicate many of the shooting poses from the film, and also create some decent "at-attention" poses. The sculpt is very detailed, and Hasbro added a gunmetal paint application for this figure with detailed eyes and painted on "battle damage."

Review by Greg Bridgeman
Posted by Gregman at 3:52 PM